Eric Kaufman, a professor of politics at Birkbeck College at the University of London, picked up in this article about the British Election Study’s internet panel survey of 2015-2016, that showed that the common theme among Leave voters was authoritarianism.

The data shows a strong correlation that can be used to identify the majority belief system of the group vote Leave. A belief in the appropriateness of the death penalty, as you can see from the graph above, is a very strong indicator of a person’s likelihood to vote Leave. This is just one of the measures used in the survey that demonstrates the high correlation of authoritarianism and the Leave vote, which shows consistently regardless of income.

But what does that have to do with parenting?

In the 1990s political scientist Stanley Feldman devised a list of four questions to measure authoritarianism. These questions related directly to the respondent’s attitude towards children:

A respondent with authoritarian tendencies would answer that the most important things for a child to be/have was respect for elders, obedience, to be well behaved, and to have good manners. Holding these beliefs about children is therefore a strong indicator for a Leave vote – as Eric Kaufmann commented on Twitter, the desire for child obedience correlates strongly with a Brexit vote.

On the flip side, those showing anti-authoritarian views are more likely to have voted Remain. Their views on children? They are more likely to hold beliefs that its more important for children to be independent, to be self reliant, to be considerate of others and to be curious. This is a view that positions children much more as people in their own right, rather than the property of adults. It is a more progressive view of children, more in keeping with children’s rights, with more space for their voice, individuality and agency.

Firstly, it is important to highlight that this isn’t an exact science. Not all Brexiters will hold authoritarian views, and not all Remainers will be anti-authoritarian. So in each group there is of course variation.

However, the data shows a strong correlation from which it is possible to draw some interesting conclusions.

The EU referendum saw a greater turn out than the 2015 general election, and viewed through this lens of authoritarian attitudes to children versus anti-authoritarian views it might just help us to get a snapshot of parenting philosophy in the UK.

On the basis of the results, taking into consideration the reality that there will be some variation on each side, it seems probable that there is almost a 50:50 split between authoritarian and anti-authoritarian beliefs about children in the UK – -51.9% of people voted Leave, 48.1% voted Remain.

What does this mean for parenting of the past, present and future?

What is most interesting in this regard is what happens when we compare the British Election Study results with the Lord Ashcroft Poll which looked at voting intention based on age. 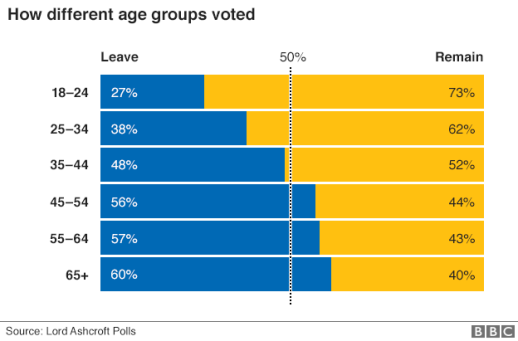 The group most likely to hold authoritarian beliefs about children are the over 65s, with 60% voting Leave. For people aged 45 and over, the majority still hold authoritarian beliefs. This makes sense from a psycho-social perspective – the older a person is, the further back in history their experience of parenting and childhood, and the further you go back, the more patriarchal society has been. The older you are, the more likely you experienced authoritarian parenting yourself, and internalised a very oppressed experience of childhood.

However, as soon as we drop under age 45, the balance starts to tip the other way, and those who may hold authoritarian beliefs about children start to become the minority group.

The majority of 25-34 year olds – 62% – showed voting intention to Remain. This indicates that the majority of that group do not hold authoritarian views about children. Interestingly, the 25 year olds in this group were born at just about the same time as the UN Convention on the Rights of the Child was created. They’re lived experience has been in a society where women have experienced greater equality, gay rights and other social justice issues have had more mainstream presence and it has been more of an everyday experience for people to be themselves and believe in their human rights.

People in this age bracket may be having a unique experience whereby their experience of childhood was characterised by authoritarian views of children – as all of the people in generations older than them were by majority more authoritarian, but their own views about children and childhood have undergone transformation. Their views are probably in discord with their parents and grandparents, with the generations preceding them.

When we drop down to the youngest age bracket, the 18-24 year olds, we can see something very encouraging. 73% showed voting intention to stay, suggesting that the significant majority of this group do not hold authoritarian beliefs about children. In fact, this group is proportionally more anti-authoritarian, than the 65+ group is pro-authoritarian. This suggests that the parents and future parents in this group are most likely to believe in children as people not property, to respect children’s individuality and voice, and to encourage curiosity over obedience and conformity.

Parenting more aligned with children’s rights is likely to have become mainstream and the normal way of life for the majority of parents and families once the current 18-24 year olds are parenting.

3 thoughts on “What can the EU Referendum result tell us about the future of parenting?”